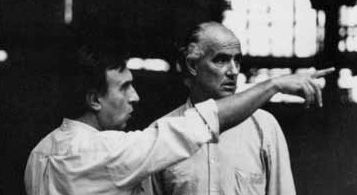 The Nono Project for Schools and the network Le Scuole di Pace are an initiative of Fondazione Scuola di Pace di Monte Sole Marzabotto (Provincia di Bologna) and Fondazione L'Unione Europea Berlin in cooperation with IncontriEuropei.
In April 2001, Hans Eichel, former Federal Minister of Finance, Vittorio Prodi, former President of the Province of Bologna, and Manfred Stolpe, former Prime Minister of the State of Brandenburg, launched the initiative to establish a network with schools in European regions by creating two registered foundations in Bologna and Berlin.

The network Le Scuole di Pace is a platform where students work on issues of democracy and human rights in a thematic and interdisciplinary way and communicate the results via the Internet. The contacts are intensified in personal encounters. The network is supported by a circle of friends of the Nono Project, by patrons and cooperation partners.

The Nono Project offers young people the opportunity to reflect on the conditions of their own situation. The project should open an access to the important topics of our cultures in Europe. It should help students to find their own way to develop democracy and human rights with regard to their own history and region.

The video productions in German, Italian, Polish, French, Dutch and English are available to students, teachers and multipliers in the field of education for an interdisciplinary and proactive approach to dialogue on the learnability and teachability of education, culture, peace and awareness of the inalienability of human rights.

Under the patronage of the coordinator for German-Polish relations, Dietmar Woidke, a cooperation with the district of Schweidnitz/Świdnicy in Poland began in 2016/17. There, students from one of the local schools worked and discussed the project. Finally, the recordings of the letters read for the Polish version of the DVD were also produced.
The Federal Foreign Office reports on its wepage about our project.

Later, with the participation of the Foundation for Polish-German Cooperation, the educational project "Following the footsteps of Emil Krebs" has been carried out. It focused on language learning and competitions as well as innovative teaching methods. Participants could develop their language and social skills.

The foundation of the project work in the network is the video production "Luigi Nono - Il canto sospeso", published as a DVD edition with Claudio Abbado, Bruno Ganz, Susanne Lothar, Angelica Ippolito, Gian-Maria Volontè, Ben Kingsley, Umberto Eco. The production in Italian features Angelica Ippolito and Gian-Maria Volontè, the German one Bruno Ganz and Susanne Lothar; in the English video Ben Kingsley is reciting the letters. The edition is available exclusively to schools and educational institutions.

The edition is used interdisciplinarily and with different aspects mainly in the subjects music, German, history, visual arts. Results of school projects and a timeline can be found at nonoprojekt.de (currently in German only), for example documentation by:

The production is based on the composition "Il canto sospeso" by Luigi Nono. He selected ten last letters from resistance fighters for his choral work, which was commissioned by the WDR in 1956. These were written by young people, men and women from Greece, Russia, Poland, Italy, Bulgaria and Germany who resisted the Nazis and were murdered by the Wehrmacht in 1942 / 1943. The letters are testimony of humanity and tolerance, of love and hope. They contain messages that still today give young people living example of values, culture, education and responsibility for their own actions and for the well-being of others.

The letters are read in the German version by Susanne Lothar and Bruno Ganz, in the Italian version by Angelica Ippolito and Gian Maria Volontè and in the English version by Ben Kingsley. In the other versions, the letters were read by students of the respective schools in the context of the project work.
The concert part of the video "Luigi Nono - Il canto sospeso" was recorded in the Berlin Philharmonie and enriched with images of contemporary history from World War II, Auschwitz and with works by Francisco de Goya, Pablo Picasso, Otto Dix and Alberto Giacometti.